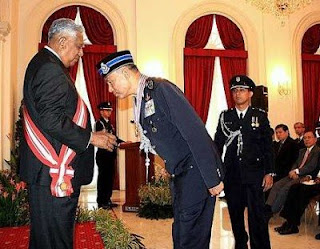 Honoured: Nathan conferring the award to Musa at an official ceremony at the Istana in Singapore yesterday. — Bernama
IGP awarded Singapore’s DSO

SINGAPORE: Inspector-General of Police Tan Sri Musa Hassan was awarded Singapore’s Distinguished Service Order for his “outstanding contributions in fostering excellent ties and cooperation” between the Malaysian police and the republic’s police force.

According to the citation which was read before Singapore President S.R. Nathan conferred the award, Musa, 57, had enhanced “the safety and security of both countries”.

It added that Singapore had benefited from Musa’s active and significant contributions in the promotion of close bilateral ties between the Malaysian and Singapore police.

“The excellent cooperation in the areas of investigation, intelligence, training and sharing of information has yielded tremendous benefits for both forces in combating terrorism and transnational crime,” it said.