Is Utusan safe from the merger? 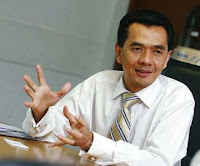 Media Prima Bhd’s revelation a week ago that it plans to takeover 43% owned The New Straits Times Press (M) Bhd (NSTP) will not involve Utusan or any form of merger.

Amrin Awaludin, Group CEO of Media Prima Bhd when ask, is Utusan on its target list?. “No. Write that down. No!,” says Amrin categorically, clearly eager to quash that rekindled rumour following an earlier botched plan to merge both NSTP and Utusan which threatened to blow up into a political minefield.
Author Unknown at 11:10 AM