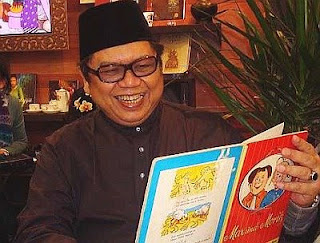 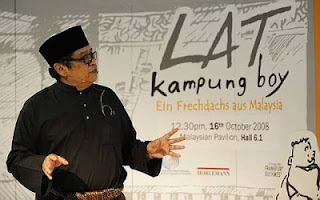 The Kampung Boy comes to Frankfurt

Sambal on the side
By BRENDA BENEDICT

After a two-month hiatus, our columnist takes a break from unpacking boxes to meet Malaysia’s beloved Kampung Boy at the world’s biggest book fair.

The Kampung Boy at the Frankfurt Book Fair? That was too good an opportunity to miss!

When the Malaysian Consul General in Frankfurt, Saiful Azam Abdullah, first informed me of Lat’s imminent arrival in town, I immediately requested an interview.
Malaysian cartoonist Lat (Mohamed Nor Khalid) at the Frankfurt Book Fair on Oct 16.

After all, I have been a fan ever since I first read his Kampung Boy as a seven year-old. His illustrations never ceased to amuse me. And having spent the better part of my childhood growing up in a rubber plantation myself, I could relate to the adventures of the book’s tousle-haired protagonist with the toothy grin.

Even today, I can’t help giggling at the myriad characters who enliven his distinctive sketches of Malaysian life €” the Chinese lady with the beehive and bat-wing glasses (supposedly inspired by his former English teacher, Mrs Moira Hew) or the bespectacled Indian Uncle with the middle parting and curly side burns. And of course, the distinctive “Lat noses” on famous personalities.

Datuk Mohamad Nor Khalid (as Lat is otherwise known) came to town a week ago to launch the German edition of his bestseller, Kampung Boy. The German version features an additional tagline €” Ein Frechdachs aus Malaysia €” which roughly translates to either a “rascal” or a “cheeky monkey” from Malaysia.

Either moniker suits him, I guess. The jolly cartoonist was in his element, having the large crowd in stitches at the presentation of his book at the 60th annual Frankfurt Book Fair (see story on p6).

Looking dapper in a black baju Melayu complete with songkok and samping, he began his presentation by explaining that he usually does not “go around wearing this costume”.

“Whenever I wear this outfit at a hotel in Kuala Lumpur, the security guards at the entrance would salute me thinking that I am the ex-president of Indonesia. I’d salute back,” he said to peals of laughter.
Flashing his famous smile as he flips through Maxz and Moritz. — AFP PHOTO

The history of Lat’s entry into the world of comics needs no introduction. Having had supportive parents, Lat’s love of drawing was nurtured early on.

“I’ve been reading comics ever since I was a kid. When I couldn’t read yet, I’d just look at the pictures,” explained the 57-year-old, whose favourite cartoonists include the Sri Lankan Aubrey Collette, who created Sun Tan, the Asian Sensation, and the German Wilhelm Busch, famous for his Max and Moritz comics.

When I later showed him a copy of my husband’s original Max and Moritz comic, he said, “I grew up with him. When I came to Germany in 1983, I had a chance to visit a museum in Munich and saw the original artwork. This is the old style of drawing, which is attractive and will not go out of date.”

To introduce his book, a slideshow featured highlights from the Kampung Boy. While it was a hilarious eye-opener for the uninitiated (with Lat providing side-splitting commentary), it was a walk down memory lane for the Malaysians present there.

Many were seen nodding vigorously whenever he described certain childhood activities. Although most of us have now spent a large portion of our lives in cities, almost all of us could recall, or at least relate to, eating coconut embryos as a treat, skinny-dipping in rivers or playing hide and seek with the other neighbourhood kids.

A collective “awww” went up when he mentioned that the original kampung house where he spent his childhood and which was also featured in the book was later sold to a relative in the 1960s.

His descriptions of a simpler life made me wonder if development had somewhat dulled our senses.

For instance, his class would sometimes convene at the headmaster’s house to listen to History lessons over the radio.

“When we heard the sound of the Portuguese attacking Malacca, we’d picture it in our heads. That probably also helped us with our imagination.”

“People were also more patient. If you had a favourite song, you’d have to wait patiently by the radio and listen to the request programme. My favourite song was It’s all in a Game by Cliff Richard. You hope that it would be this song but then the announcer would play another and you’d have to wait. You don’t get things you want immediately,” he explained.

How unlike today where the shuffle button on the iPod plays the song you want.

“The first game we played €” like children anywhere else €” was hide and seek. To play hide-and-seek, you needed friends. It’s not like now where kids play computer games alone. In my time, if you had no friends, who was going to look for you?”

And while we think nothing of the speed trains whizzing between cities, a simple bus ride into the city was a big deal then.

“To celebrate Raya, we sometimes used to go to Batu Gajah. At that time for RM1.70 we could tengok wayang (watch a movie) and have mee goreng. I used to wear seluar pendek (short pants) with a necktie!” he said, laughing at the memory.

With increasing numbers of people migrating to cities, does Lat feel that many are missing out on something special?

“There are two things here. Firstly, in many places, people don’t have a kampung anymore. Secondly, it was the environment of the kampung that mattered the most.

“When you remember your place of origin, there was a river with fish and a very good school with lots of pupils. Lots of laughter and friends meant the most. In those days, if you passed a particular exam it meant that you had to go to another town and you wondered about the friends that you would leave behind.”

And now these and other beloved childhood memories have been introduced to the people of “Bank-furt” (Frankfurt’s nickname playing on its financial capital status).

After presenting his book, Lat mingled easily with the crowd, flashing his trademark grin. He gamely signed copies of his book for fans and curious onlookers alike.

Among the autograph seekers was David Price-Hughes who spent his childhood in Kuala Lumpur.

“My parents really loved his books and we had several copies around. We still look at them and I have pictures of me with Lat T-shirts on. Looking at the pictures in the slideshow brings back memories of being in KL,” said the Briton who coincidentally was an exhibitor at the same book fair.

The Kampung Boy is now available in nine different languages and its far-reaching appeal has garnered its author yet another accolade. Last Monday, the German-Malaysian Society presented him an award for “Outstanding Contribution towards Promoting Cultural Understanding Between Malaysia and Germany”.

Yet Lat remains unfazed by all the fuss surrounding his 30-year-old book.

“There’s nothing spectacular about the book. It’s all just a recording of what happened daily. If you know the origins of your father or grandfather, you tend to appreciate it more.”

And this is probably why Lat has sealed his reputation not only as a talented artist but also a witty chronicler who warms the cockles of your heart.

> Brenda Benedict is a Malaysian living once again in Frankfurt. Her autographed copy of the Kampung Boy is now safely stored away from her book-chewing cats.
Author Unknown at 10:44 PM